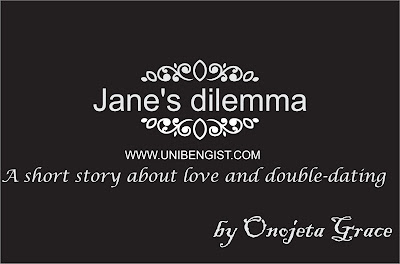 I laughed "you don't seriously expect me to believe that "
"I'm not joking, you've been on my mind all evening. I'm not even the type that calls
girls in the night but I just had to call you " he sounded really serious
I didn't know what to say "oh...wow..that's..." I stammered
"So how was your day?" he asked
"Great"
While Somto and I were still talking on the phone, a text message from Chuks flashed across the screen 'Meet me outside ' I wanted to hang up and go see him immediately but Somto and I just started talking and I've been dying for his attention since I was 15, I couldn't end our conversation just yet. Chuks can wait—I thought. I continued to talk and laugh with Somto for nearly an hour, I completely forgot about Chuks until he sent another message 'Seems like you're not in the mood to see me—I'm leaving, Goodnight I love you ' I felt guilty instantly. What kind of girl ignores her boyfriend because of another guy? I realized I had done something very wrong, I owed Chuks an apology. I finally ended my phone conversation with Somto and dialed Chuks' number. He didn't let it ring for long before picking it up "Baby...what's up" he sounded quite sad, not angry. "I'm good, I'm sorry I kept you waiting, I fell asleep.infact I just saw your two messages just now" I lied
"No problem, I'm not angry at all"
I heaved a sigh of relief "I'm glad to hear that "


"Earlier when I called, you sounded really off, is there any problem? " He sounded really worried
"No baby, not at all, I was just feeling sleepy "
We talked for a few more minutes before saying our 'goodnights' and 'I love you's'
When I checked into whatsapp, I saw a message from Somto. it was a brief joke about none other than 'Akpos'. I laughed heartily after reading it. I typed 'LOL' along with lots of emojis and sent it to him. He replied immediately and we began chatting. I guess our previous discussion on the phone wasn't enough for him, honestly, it wasn't enough for me either. We chatted till about 1.am and I couldn't help but fall in love with him all over again and unlike in secondary school when I had no hope of getting him, this time around I was very hopeful, infact I was very sure he liked me. I couldn't bring myself to tell him I had a boyfriend, I didn't want to ruin any chance I had with him which was very wrong considering the fact that I was in a serious relationship with someone who was head over heels in love with me, someone who would be extremely hurt if he found out about what was going on.
Valentine's day was just around the corner and I couldn't wait to see what Chuks had in store for me. I also prepared a very good lie to tell Somto just in case he asked me to be his val. I couldn't choose him over my boyfriend on Valentine's day, that would be unforgivable. But I didn't want to hurt his feelings by turning him down, I cared about him deeply. Whenever I thought about my feelings for him, all I felt was guilt and pity for Chuks. He didn't deserve a disloyal girl like me, he was far too nice and caring. he didn't have much financially but he did all he could to make me happy, he was willing to spend even his last kobo on me, he wouldn't mind staying hungry for my sake and here I was, playing hide and seek with someone else.
A day to Valentine's Day, Somto and I met at the library. Afterwards we strolled to the cafeteria and while I was having my drink, he asked me to be his val. His deep sexy voice and extremely handsome innocent-looking face made it very difficult for me to turn him down or give any excuse. I said yes even though I felt a hole in my stomach. 'This is wrong...very wrong' I thought
I loved Chuks dearly but whenever I was with Somto, I completely lost myself, I was a fool who didn't care about right or wrong I just wanted to have his attention for as long as possible because a few years ago I would have done anything to get it so now that I had it, I didn't want to let go.
Valentine's day finally came and I was in a serious dilemma. What if both guys met in my hostel? or what if they wanted to take me out at the same time. Chuks was the first to call, he asked me to meet him at the school's main gate by 4pm, he wanted to take me somewhere outside the university's premises. Somto called about two hours later and told me he was coming over to pick me up at 5pm. I was in serious trouble, I couldn't meet Chuks by 4 and still meet Somto by 5, I had to come up with a plan. I decided to seek help from Tracy because she was a very devious person, lying and sneaking around with boys was her talent.
"Tracy I need to talk to you" I said panting
"Calm down—what's the matter?"
"It's a long story "
"Then summarize it " she said in her usual devious manner
"Ok—I think I'm in love with two guys and now..."
"Whoah" she interrupted "You're in love with two guys? hmmmm I hail ooo"
I eyed her furiously "Would you just let me finish? "
"OK go on I'm all ears"
"Both of them are planning to take me out and there's a small clash of time"
"That's a small thing na...sit down and learn from the master" she replied boastfully

Posted by Ejini Emmanuel at 08:02:00
Email ThisBlogThis!Share to TwitterShare to FacebookShare to Pinterest
Labels: Article