VIDEO: Vehicle Burst Into Flame In Front Of UNIBEN Hostel 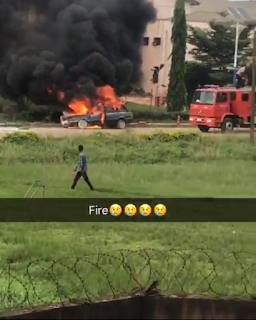 A student taxicab caught fire in the early hours of today on Ugbowo main campus of
the University of Benin, Edo State, CAMPUS GIST reports.

Our correspondent reports that luckily, no life was lost in the fire incident.

CAMPUS GIST reports that the Audi car with plate number BEN-302RF was heading towards ‘Buka’ area from main gate when it caught fire at the front of NDDC hostel.

One of the occupants of the vehicle told CAMPUS GIST that the fire started from the bonnet after they observed some irregularities with the gear selector.

She said: “We were just coming from main gate and heading towards our hostel when we noticed smoke coming from the gear selector.

“We quickly alerted the driver and he made urgent attempt to open the car's bonnet.

“Unfortunately, the bonnet was already hot. By the time he managed to open the bonnet fire suddenly ignited from nowhere and the next thing we heard was a ‘BOOM’. The vehicle was gone.”

Our correspondent reports that about four female students were on board at the time and they all managed to escape unhurt.

CAMPUS GIST learnt that by the time the university's Fire Service Department arrived the scene, the vehicle had burnt halfway.

By the time our news crew visited the scene, the fire fighters had managed to put out the fire and the carcass of the burnt automobile was seen lying across the road.

Also, the driver of the cab was seen in uncontrollable tears. It was gathered that he is not the owner of the vehicle but operating it on hire purchase also known as ‘balance and carry.’


Car exploded in UNIBEN this morning . The School security fire fighters came in and rescued the involved victims. #UNIBENGIST
A post shared by Unibengist (Official) (@unibengistng) on Jun 20, 2019 at 7:58am PDT

Posted by Ejini Emmanuel at 19:03:00
Email ThisBlogThis!Share to TwitterShare to FacebookShare to Pinterest