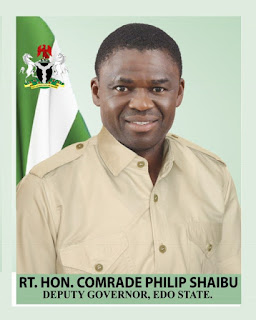 
Comrade Shaibu, who disclosed this during a meeting with leaders of the Student Union Government (SUG) of the University of Benin (UNIBEN), where he briefed them of the state government’s intension to commence the enforcement of the new revenue law, said other motorists in the state had since commenced the payment of the new levies, asserting that the N200 levy will not warrant any form of increment on transportation.

He said: “Since January this year, none of these unions have paid a dime until now that we want to start the implementation of the Harmonized Levies and Taxes law. And though out this period we did not hear that these commercial drivers reduced their fares for students since they have not been paying levies.


“In the past they were paying almost N2000 daily; that was when the former administration was using private agents to collect levies. And then these drivers were paying and not complaining. Now we are saying they should pay N200 daily as specified by law they are threatening to increase fares for students.

“If they try it, I will lead a protest against them and we will ban them from operating here. I have risen to the number one student of this country before and I know the problems of students. I heard one of the drivers saying that if we ask them to pay tax they will increase their fair, but let them try it. I will leave government aside and protest against them.

“The truth is that the same fuel they buy now is the same fuel other motorist buy. Again they must pay their taxes because if the roads are bad tomorrow it is government that will fix the road. It is not negotiable it is the law of Edo state and it does not increase the fare of students at all,” he added.