JAMB Admission Posting Is Not The Same as Admission List or Admission Letter - Prof. Dibu 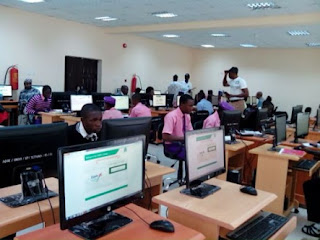 The Joint Admissions and Matriculation
Board has stated that the recent list of
candidates sent to tertiary institutions contains just the names of candidates
who met the national cut-off point within the set criteria and
hence qualified for screening in their respective institutions based on the institution's capacity and it's not in any way an admission list.

This was disclosed by the JAMB registrar Prof. Dibu Ojerinde, in a statement on Sunday.
According to him, the admission list will only be made available after appropriate screening of candidates by the institutions.
He equally added that all institutions that have need for more candidates can source from their omnibus printout earlier sent to them by the
board in order to ensure that available spaces are adequately utilised.
In an earlier statement on Saturday credited to the Deputy Director of Press and Public Relations in the Ministry of Education, Mr. Ben. Bem-Goong,
it was stated that the role of JAMB is to conduct the UTME, compile the list of candidates whose scores meet the cut-off marks (180 and above)
and send same to the universities.
The institutions, will now shortlist the candidates, using the agreed guidelines and thereafter return
the shortlisted candidates to JAMB for verification
of compliance with the guidelines and issuance of
JAMB admission letters.