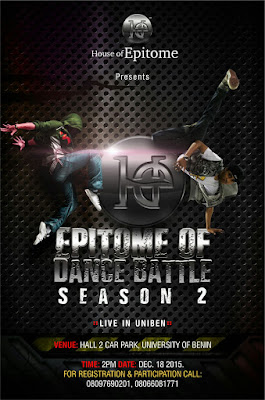 The stables of the House of Epitome comes the Second Edition of the Greatest Dance battle ever to be organised in the City of Benin, You asked for it, Now it's coming to you again, Ladies and Gentlemen, It's the EPITOME OF DANCE BATTLE SEASON 2!!!!

The Dancing Shoes are getting warmed up because its a dance battle.
Grand prize:  #100,000 naira cash prize and 3 dance videos.